SGN undertook a remediation programme during the 2020 festive period at Croydon Road in Beddington. Working closely alongside Transport for London (TfL), ULC deployed CISBOT to support SGN in minimising disruption to traffic and road users while aligning with TfL’s Roadworks Charter. 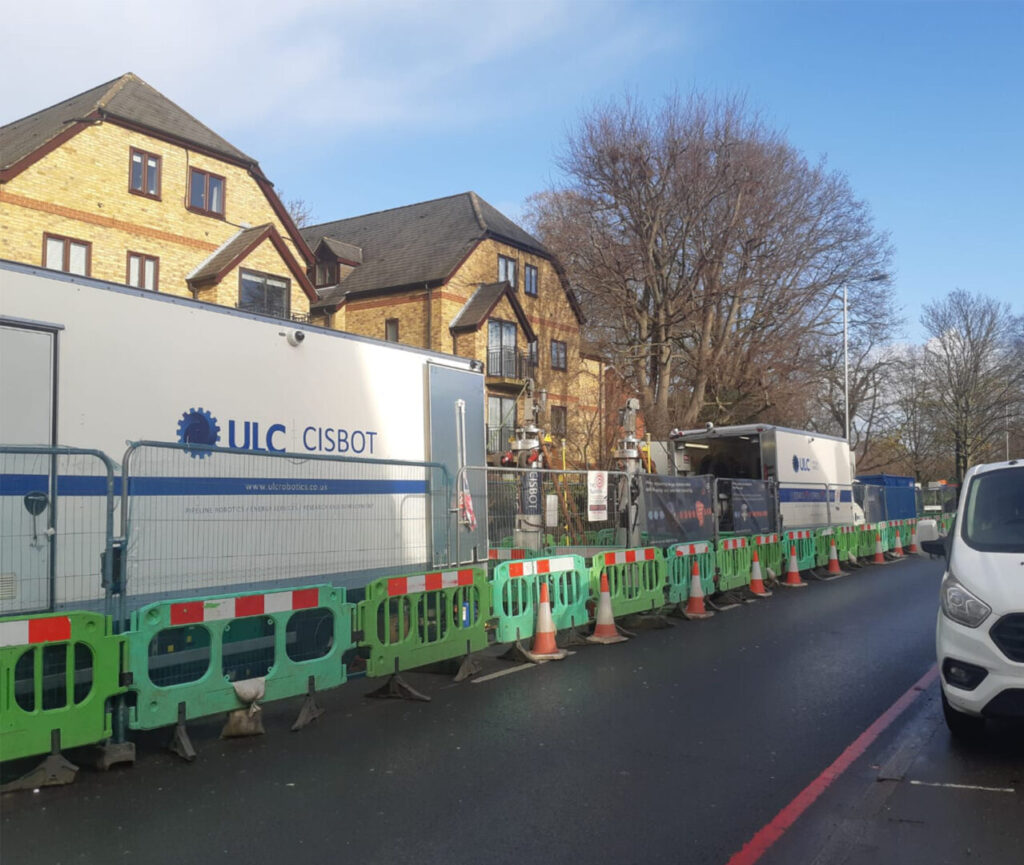 TfL’s Roadworks Charter calls for roadworks to adopt new and innovative technology to improve working methods as well as increasing efficiency by significantly reducing the duration and impact of works in an effort to keep London moving. Identifying the opportunity to support the initiative, ULC worked collaboratively with SGN to deploy CISBOT at Croydon Road. CISBOT is strategically aligned with TfL’s Roadworks Charter as it overcomes challenges associated with traditional methods of gas main remediation.

The project scope involved remediating 452m of an 18” cast iron main as part of SGN’s wider remediation work in the area. ULC’s operatives deployed CISBOT in only 3 excavations to seal a total of 125 joints under live conditions over the 4 week project delivery time.

The cooperation and dedication shown by ULC’s operatives to work away from home over the festive period helped to drive the successful outcomes of the project for customers and the stakeholders involved.

“SGN’s use of CISBOT at traffic sensitive locations up to and over the Christmas period on the A232 Croydon Road is a great example of how innovative technology can minimise the impact of works, which aligns with our Roadworks Charter and TfL’s network management duty to keep London moving. The successful completion of future proofing the gas main along this corridor has helped us in reducing any unplanned impact to all road users and ensures a reliable safe gas network for the area.”

The project was situated on the A232 – a traffic-sensitive location as it contains various bus routes along it. Working with TfL to manage the traffic, temporary traffic lights were in place alongside the temporary suspension of a bus stop during the project. With traffic management involved, it was important that ULC’s CISBOT work delivered timesaving benefits to SGN and TfL as well as road users.

With the project taking place during the busy festive period, it was also crucial that there would be no interruption to the customers’ flow of gas. This provided the perfect opportunity to use CISBOT as the work could take place live inside the gas main without taking the section of pipeline out of operation.

Using robotic technology at Croydon Road compared to conventional methods of gas remediation has helped to significantly minimise disruption as:

“We’re working hard with TfL and ULC to continually innovate to reduce the impact of our roadworks. Using CISBOT at Croydon Road has allowed us to complete this project while keeping the road open and the traffic moving. Our project will continue to keep local homes and businesses safe and warm long into the future and was achieved without interrupting the gas supplies to any of our customers during this cold weather and these unprecedented times”