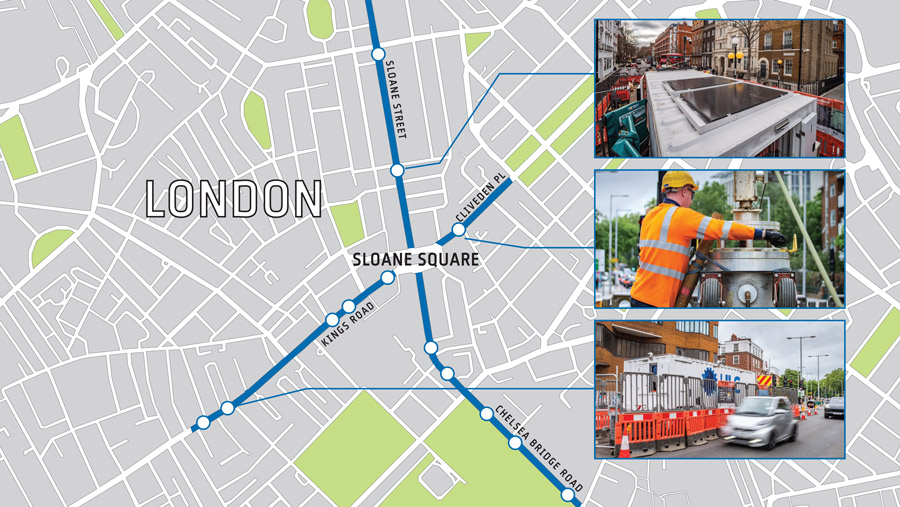 Cadent partnered with ULC Robotics to remediate more than 1,300 joints using CISBOT, after gaining the significant support from The Royal Borough of Kensington and Chelsea Council. The project was completed in 44 weeks – an 80% reduction in the time traditional works would have taken.

The Sloane Square project involved 8 phases where CISBOT was deployed in almost 20 pits around the streets located off Sloane Square, working on 18”, 20”, 24” and 36” diameter mains. Due to the high-profile and potentially disruptive locations of work surrounding Sloane Square, ULC Robotics strategically positioned their launch locations to ensure that traffic lanes and lights were still in use on any major bus routes and that minimal disruption was caused to members of the public and road users.

Cadent would typically face challenges with replacing and maintaining their assets, including:

“Through the use of CISBOT, the project was completed within 7 months as opposed to nearly 3 years if more conventional methods of replacement were used. This is unprecedented and is one of our biggest successes so far in terms of positive network management. I applaud Cadent and ULC Pipeline Robotics positive and progressive approach in using innovative techniques such as CISBOT and look forward to building on our working relationship going forward.”

Through the use of innovative robotic technology, the following benefits were delivered during this project:

“CISBOT delivers essential work to the gas network underground with minimal disruption to the public on the surface. That’s great news for the public who get to enjoy the continued provision of safe and reliable gas supplies with a lot less above ground disruption as shown by our recent work in Sloane Square.”